One of our favorite bottle shops in San Diego has just turned 3 and to celebrate they have collaborated with the craft beer masterminds over at Alpine Beer Company to give us a craft beer worthy of the gods. An American IPA brewed with Mosaic, Simcoe and Citra hops, Bine & Vine’s 3rd Anniversary Ale is here and San Diego beer fans are celebrating with each and every sip.

Don’t miss my original write up located in the latest issue of SD Uptown News!

I miss a lot about living in South Park/Golden Hill. From walking to, and stumble home from, my favorite craft beer bar – Hamilton’s Tavern, the nightlife that includes live music and culinary adventures, all the way down to the occasional gun shot in the distance singing me to sleep. But one thing I miss most would have to be my frequent visits to one of my favorite craft beer bottle shops, Bine & Vine.

To share just some of my own personal history, the first time I ever walked into the shop I immediately met Owner and Beer Buyer Geoi Bachoua, and not long after he was sharing his knowledge with me on his selection as though we were old drinking buddies. And luckily, I think since that day we have become just that. A warm welcome and an offering hand of suggestion always meet guests that are willing to accept it.

But, don’t expect to have your hand held at Bine & Vine. Yes, now and then, you will be able to cash in on a Pliny bottle or two or many other hard to find bottles, but Geoi wants you to branch out and try some of the other wonderful beers he has on his shelves and he is not shy in telling you so. But, before any thoughts cross your mind, trust me when I and all of his other frequent customers say, he is right on all levels.

Bine & Vine located at 3334 Adams Avenue in Normal Heights is so much more than just your average, devoid of personality, run of the mill, bottle shop. Right when you walk in, you feel at home, like you belong. And if your first experience was anything like mine, you wonder why it took so long to make your way into this gem.

Owner Geoi Bachoua is one of the original San Diego craft beer retailers. His father’s pharmacy in Imperial Beach called South Bay Drugs was providing craft beer sales since 2001 to the public. The shop in I.B. first started carrying Alpine Beer Company beers in 2003, as Geoi says they were one of Alpine’s first accounts.

Bachoua has now been serving local, nationally distributed and exclusive craft beer out of his shop on Adams Avenue for three years. To celebrate these great three years of craft beer commerce, Bachoua has teamed up with Alpine Beer Company to create a craft that will honor none other than the people that help make his dream come true – YOU!

Bachoua and the masterminds over at Alpine have created a one-time only exclusive beer to honor these great first three years; Bine & Vine 3rd Anniversary Ale an American IPA hopped with heavy doses of Mosaic, Citra and Simcoe hops. 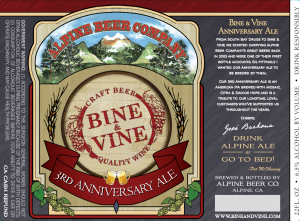 “I’m of the opinion that they make the best IPAs in the world, so yeah, it seemed like a no-brainer,” said Bachoua on why he decided to work with Alpine on this anniversary ale. He continued by saying that he wanted “…just an American IPA that tasted ‘Alpine.’”

When asked about his influence over the beer, Bachoua said, “I had heavy input on style, hop varieties and the label. I left the actual brewing to the professionals.” He continued, “I thought it would be cool to include three hops since it was my 3rd anniversary. Once we agreed upon Mosaic as one of the hops, we sampled a bunch of IPAs that had Mosaic and concluded that Simcoe and Citra would make a great three-hop combination.”

B&V 3rd Anniversary Ale is an American IPA that punches in at a respectable 6.5% ABV and pours sweet gold in color. You know when you ride Soarin’ Over California at Disneyland and you fly over the orange groves, and you get that slight tickle in your nose of sweet, fresh oranges? Well this beer has the same effect, but instead of orange groves, imagine yourself doing a fly-over of Heaven itself. I think, or at least hope, the minute those pearly gates fly open for me, this will be the exact scent that will hit me in my dead face.

This dangerously drinkable ale delivers bright and clean flavors from tropical fruits to tangerine and melon that play along nicely with the scent. When they say “drink fresh” the flavors presented here are exactly what they want you to experience. Balanced perfectly, the Mosaic hops take center stage in this beer but are expertly complemented by the addition of Simcoe and Citra hops and together, they cut through the clean malt with precision.

This is one outstanding IPA and definitely just as Geoi had hoped, pure Alpine. If you are curious about his thoughts on this Anniversary Ale he told us, “Another world-class IPA from Alpine!” We couldn’t agree more.

Sorry to gush, but actually no I am not. At all.

Approximately 120 cases of this beer were bottled and sent to Bine & Vine, who will hold a strict 4-bottle limit for purchasing. This 3rd Anniversary Ale is available only at Bine & Vine in Normal Heights in 22 oz. glass bottles. Bottles are available now until they disappear entirely. And word has it, these things are moving quickly. So make moves and get yours.

Cheers to many more exciting years over at Bine & Vine!