San Francisco’s Great Apes are back with their latest Playland at the Beach. A 5-song EP with tracks showcasing the ever changing landscape of the city the band calls home as told by landmarks around San Francisco. An instant classic meant to invoke change through thoughtful intelligent punk tunes. Digital available now from Asian Man Records.

Most music fans remember exactly where and when they first heard or acquired some of their favorites albums, records that (as much as I get grief for saying this) truly changed your life. For example, I remember the first time I picked up a Jawbreaker record, or that time I purchased the first Weakerthans record at Lou’s in Encinitas. Back when the “punk” section was in the far back of the room, when Lou’s was still multiple buildings. In fact, this is the same spot and section where I purchased my first J Church vinyl.

I remember putting these records on and the feelings of awe, wonder and amazement that came over me as I hung on to every word and lived on every chord or drum beat. Mostly, these moments happened in my younger days. As I get older, it seems less and less frequent to be moved to this degree by something new. Maybe I am jaded or maybe I am just getting old, I truly don’t know. One thing I do know is that I have found a record that has not only refueled my tank of enthusiasm, but it has given me that long-lost feeling of wonder that sends shivers down my spine that I mentioned before. That record is Playland at the Beach by Great Apes. (Digital Record Available Now! Pre-Orders for Vinyl also available at Asian Man Records.) 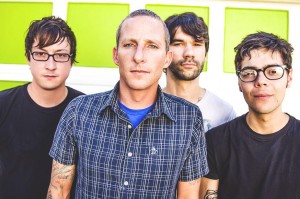 Great Apes, fronted by one of my all time favorite singers and songwriters Brian Moss (The Ghost, Hanalei, Olehole) are back with their latest release – a 5 song EP released on Asian Man Records titled Playland at the Beach.

I first became familiar with Brian Moss and his songwriting many years ago after seeing his then band The Ghost play at San Diego’s famed Che Café. Ever since, I have been moved by the music, the words and the emotion in each. Great Apes has come through with some of the catchiest and thought provoking songs to date. When Great Apes play Tower Bar on January 10th, Moss will be joining us on our Three B Zine Podcast! – He just doesn’t know it yet.

Each of the 5 tracks on Playland at the Beach is written from the perspective of different sites and locales in the city of San Francisco. An audible guided tour of the city, but not necessarily a pretty one. These 5 songs are meant to shine a bright and powerful light on the capitalism, political corruption, loss of life and liberty and inevitable change in the city itself.

Great Apes present these topics through songs that are as individual as they are beautiful and as smart as they are furious. Much like their full length release Thread this new EP is made up of catchy, addictive songs but Playland takes on a whole new level of aggression that is still somehow touching and nostalgic at the same time. Great Apes’ latest offering is a 5-song ball of energy that will fill your gut with fire, your heart with hope and leave your ears wanting more.

As a long time fan, or someone who just knows something great when he hears it, I highly recommend you take the time to pick up this record. It just might change your life. The digital record is available for purchase now and you can pre-order the vinyl at Asian Man Records. Great Apes will also play Tower Bar San Diego January 10th.