To help ring in the holiday season, Thanksgiving especially, our blog team is back with a holiday-centric Movie and a Craft Beer Pairing featuring the underrated comedy Dutch. Sit back with a perfectly paired craft beer, friends and family and prepare for the wild ride that is Thanksgiving!

Happy Thanksgiving everyone! Hopefully you all enjoyed the holiday with family, friends and of course some tremendous craft beer.

In pairing the perfect craft beer with a classic holiday film like Dutch, one’s mind can go in many different directions as mine did and I am sure the rest of the blog team’s did as well. Do I choose a strong boozy beer that can be shared amongst family and friends? Should I choose something that warms the body during the cold oncoming winter season? This movie didn’t seem to call for anything that falls into those categories, in my opinion.

The title character, Dutch, is an everyday man. He’s a simple Midwestern guy with simple tastes and no desire to impress people that he doesn’t know. Do you think a guy like this, who probably regularly reaches for a 12 pack of Old Milwaukee, is interested in a complex stout or a heavily hopped IPA? I highly doubt it.

No, Dutch wants something he can get easily, something he can swig on all day at a BBQ or a family dinner and a beer that won’t put his mind on blast after a bottle or 6. No, not even a San Diego session IPA will hold his attention. Think of a time you might try to introduce craft beer to an uninterested family member. For these reasons I reached for a local craft beer that I think might actually grab his attention and have him reaching for more. That beer my friends, is Longfin Lager from Ballast Point Brewing Company. 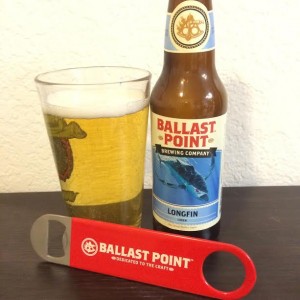 Longfin Lager is a well-balanced Helles Lager clocking in at a modest 4.5% ABV. It is crisp, clean, low on the hop bittering and could be a perfect introduction into the craft beer world for a guy like Dutch. Ballast Point Brewing describes Longfin as “…Perfect for enjoying on the beach, the boat or anywhere else you can put an ice chest full of beer.” This description alone pretty much says it all when trying to pair a craft beer with this movie and the title character’s personality.

Longfin is a well-crafted lager that is sure to win over the hearts of even the most determined macro drinker and convert them to a lifetime of beer made local and with quality ingredients. Let’s be real, the fact that it is available not only in bottles but also six packs of cans makes this Dutch’s perfect go to for any occasion whether it’s tailgating for the big game or having to drive your girlfriend’s snobby son home for Thanksgiving. 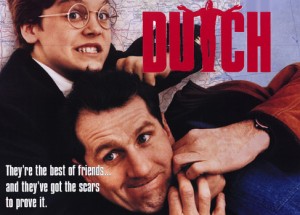 For this Movie and a Craft Beer feature, the team and I decided to take on a feature movie that not only has a big focus on the passing holiday, but also something that is easy for all of you to find, watch and test out our perfect pairings for yourself. This film happens to be Dutch, starring Ed O’Neill as title character Dutch and Ethan Embry, (known at this time as Ethan Randall) as bratty kid Doyle.

Heading into the holiday season, Dutch’s girlfriend is upset when her mega jerk ex-husband, Reed, informs her that he must break plans for the upcoming holidays with their son Doyle. Distraught by this news she tries to convince the boy to come see her for the season. But, obviously taking after his father in the manners department, he very rudely declines. Step in hero boyfriend Dutch who decides to go pick up the pain in the ass kid and bring him home anyway.

It, of course, doesn’t go as planned. Doyle basically attacks Dutch as soon as he arrives at his school dorm room. But it will take a lot more than getting shot with a BB gun to put Dutch in his place. He ties Doyle to a hockey stick and drags him out of school to come home.

The trip home is filled with mishaps as Dutch tries his best to bond with Doyle. From a firework show gone wrong, to being robbed by prostitutes. Dutch’s car is even totaled by a speeding semi truck. All signs point to disaster for Dutch trying to save the holiday season for his girlfriend, and ultimately their entire family.

With the cards stacked against him, will Dutch not only be able to get the boy home for the holidays, but in one piece? And even if he does make it back in time, will the boy ever warm up to his attempts to bond or will Doyle ultimately ruin the holiday altogether? What about his jerk dad Reed? Will Dutch make true of his promise at the beginning to physically punish Reed if he hurts his girlfriend? Grab a six-pack of my perfectly paired beer and find out for yourself.

The Good- Dutch is a highly underrated holiday film, and unfortunately even I fall into the crowd that missed this one while growing up. In fact, I was only introduced to this movie a few months back. So, color me stoked that the team decided upon this from other movies that fit our Thanksgiving theme. You can’t beat Ed O’Neill in, really anything he does. Plus seeing Ethan Embry, someone we all know and love, as a young child actor paired with O’Neill is a winning combo. This film is an all around great time from start to finish and perfectly holiday fun.

The Bad- The fact that I am just being introduced to this movie and missed out growing up is definitely a bad thing. Otherwise, it’s a pretty solid holiday film.

Overall- As stated before, Dutch is highly underrated and if you haven’t seen it, well, I am obviously suggesting it. Great for a viewing while family is in town for all ages. Plus, I will watch almost anything that has Ed O’Neill or Ethan Embry in it. 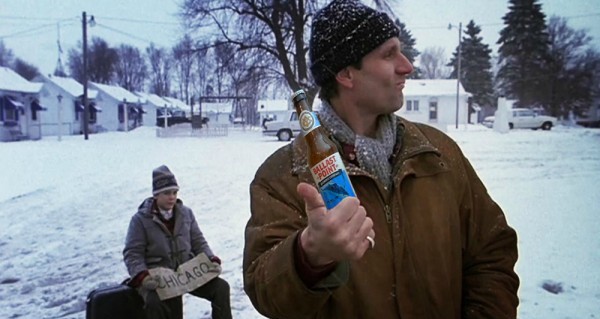