Bine & Vine Bottle Shop and Dark Horse Coffee Roasters are located in the historic neighborhood, Normal Heights, on Adams Avenue in San Diego. Described by many as “one of the most walk-able neighborhoods in San Diego”known for its vintage character and neighborhood celebrations.

The beer is scheduled to be bottled early next week with an official release shortly after. Bottles will be available EXCLUSIVELY at Bine & Vine Bottle Shop, initially. 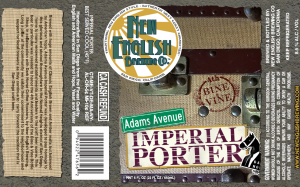 “Brewed with huge amounts of Classic English Brown and Amber malts but balanced by American hops, Adams Avenue Imperial Porter was developed to pay homage to this glorious and storied thoroughfare in the Normal Heights district of San Diego, home to many renowned  establishments and leaders in the craft beer scene. This beer in particular was created to honor the 4th Anniversary of the Bine & Vine Bottle Shop, in collaboration with Dark Horse Coffee Roasters, by New English Brewing. Long a pillar in the community we salute their commitment to the neighborhood and support for local brewers as they continue to carry forward the tradition that is San Diego craft beer.”