Movie and a Beer is back, and this week our team of collaborators have decided to tackle one of the most iconic adventure comedies of our time – Ghostbusters! Join us as we collectively talk about and pair a craft beer with one of my personal favorite movies ever filmed. Just remember, don’t cross the streams!

Much like my previous Beer and a Movie features, I look to pair a craft beer with Ghostbusters that is not only enjoyable during the watching of the film, but one that fits in with the overall feel and idea of the movie. Our heroes in the film are scientists – well, three of them anyway – and are proud of their work and studies. Even Venkman, who makes a joke out of every situation, when pushed to the limit breaks out the classic line, “Back off man, I’m a scientist.” Our heroes look to save the world from supernatural forces by using science, and of course some intense Proton Packs.

Not only did I want to match this part of the characters lives by choosing a craft beer that could represent a scientific lifestyle, but I also wanted to be a bit selfish this time around due to the odd heat wave we have currently been dealing with in San Diego. So, I wanted something drinkable and light during these long hot days. For Ghostbusters I reached for Elemental Pilsner from Lightning Brewery. 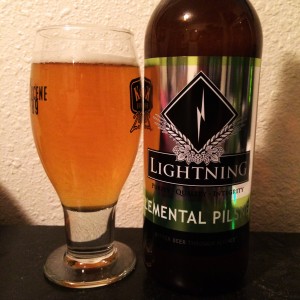 Of course, I also wanted to continue to keep my pairings local. At Three B Zine, we always aim to “Live Local”, so for us it’s the only way to go when pairing a craft beer with a movie.

Interestingly, Lightning Brewing, located in Poway, was started by Jim Crute, a Ph.D. Biochemist and life-long scientist, who was also an avid home brewer during his college days. Although the characters in the film are actually parapsychologists, NOT biochemists, I feel as though if they were craft beer fans, Mr. Crute would become their best friend in no time while bonding over beer, science and of course beer science.

Elemental Pilsner is a refreshing and crisp craft beer clocking in at 5.6% ABV. This German Pilsner is brewed with German Pilsnermalz, noble hops and Bohemian lager yeast. Elemental starts off with a crisp, refreshing taste with a slight malt sweetness leading to very noticeable hop spiciness. It seems to have a higher hop bitterness than some pilsners, leading to a more complex overall beer. Elemental then ends with a bitter, brisk bite leaving you wanting more again and again. As thirst quenching as it is flavorful, this is a clean, quality beer that could keep any scientist company during many late nights of research.

Due to my recent Movie and a Beer features, you may well know that I am obviously a big time fan of 1980s adventure films. Back to the Future being an obvious choice, followed by many more from this fabulous decade. But no other movie follows so close to my love of BTTF as this weeks movie and beer pairing – Ghostbusters.

Ghostbusters is a film I grew up watching quite possibly more than any other movie ever filmed. I had, and still to this day have, a gigantic plush Stay Puft Marshmallow Man that I would use to terrorize every item in my house. Really, not much has changed. I even have a giant Stay Puft crushing through Downtown San Diego tattooed on my left leg. 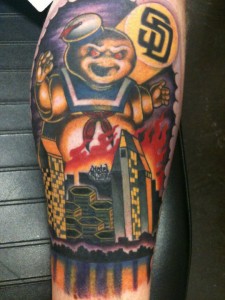 Ghostbusters is truly a magical film experience, pulling in the viewer and trapping their attention from the very seconds in which it opens. The movie kicks off with a terrified librarian coming face to face with, and I quote, “a Free Floating Full Torso Vaporous Apparition,” leaving viewers young and old needing to see it themselves.

Ghostbusters follows three goofy parapsychologists who decide to open a ghost catching service in New York City, portrayed by Bill Murray, Dan Aykroyd and the late great Harold Ramis. Aykroyd and Ramis not only star in the film, but wrote it as well.

After being fired from their posts at Columbia University, the three wacky scientists decide to start the ghost evacuation business, Ghostbusters. On their first “job” they encounter a “…non-repeating phantasm, or a class-5 free roaming vapor, real nasty one too.” Otherwise known in the Ghostbuster cartoons and folklore as Slimer. With the trapping of their first ghost being such a success, minus the few plates, tables and interior walls being destroyed, they boys take it to the streets and start cleaning up the town, becoming some sort of local celebrities in doing so. With business booming so high, they look to hire extra help and we are introduced to Winston Zeddemore played by the great Ernie Hudson. The foursome is now complete.

Now, as in most situations, all good things must come to an end. Not only does Peter Venkman (Murray) fall school boy in love with Dana Barrett (Sigourney Weaver) who’s apartment building is the hangout for Sumerian shape-shifting god of destruction – Gozer the Gozerian. Barrett’s apartment just so happens to be the “…Corner penthouse of spook central.”

As if this isn’t enough to worry about, Ghostbusters headquarters is shut down and our heroes are taken into custody thanks to the snakiest of snakes, Mr. Walter Peck, who orders the ghost containment system be shut down, releasing hundreds of trapped spooks into the city to wreak havoc.

With the deck stacked so highly against them, how will the Ghostbusters be able to save New York and the world? Can they defeat Gozer when it takes the shape of something so unimaginable, so scary that it terrifies you beyond the capacity for rational thought? Will our heroes have to do the impossible, cross the streams, to defeat the most evil this world has ever seen? Better grab my paired beer, sit back and find out for yourself.

The Good – My “favorite” things about this film are too many to count. But to name a few – the comedy is aces. The jokes all hit home better than the last and the punches never lose strength regardless of how many times you watch. Another is the films ability to not only be hilarious beginning to end, buts its ability to scare while being funny. A rare feat in my opinion. The scene in which Walter Peck has the containment unit shut down, to this day, still churns my dreams into nightmares. Plus the visuals of the ghosts and spirits themselves are nothing to bat an eye at. They make some “horror” films of todays standards look like Sesame Street. And of course, the characters. All of which are timeless comedy roles from some of the most funny movie actors in our lifetime. Memorable, hilarious and heroic all wrapped together.

Overall – This is the standard to which adventure comedies should try to achieve. The bar was set high with this one, and it rates with, if not surpasses, any comedy adventure film recorded within my lifetime. It’s a classic that will never lose its ability to entertain, scare and bust your gut with laughter. Absolutely one of my favorite movies ever. RIP Harold Ramis – The world will never be the same without you. 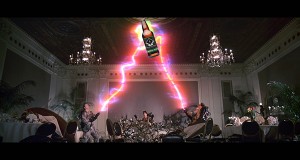