Our team of collaborators returns yet again and this time we complete the Ghostbusters film series. Join us as we collectively talk about and pair a craft beer with the second and final chapter of one of the most iconic action comedies to ever make us laugh and scream – Ghostbusters 2.

Now, I have made it pretty clear in my previous movie and a beer contributions, that my beer pairing will always follow a similar formula. That formula includes choosing a craft beer that is not only something you will enjoy while watching the film, but something that also follows true to a theme within each film. And of course I always want to live, and keep it local.

In Ghostbusters 2, our heroes are faced with an interesting villain. That villain being Vigo the Carpathian – a sixteenth-century sorcerer hell bent on taking over the world by way of transferring his soul into the body of a child. Once he is successful in regaining a new, human form, he plans on ruling the world and unleashing his own brand of Hell upon the Earth. It was said that Vigo was a genius, a tyrant, a lunatic and a genocidal madman. He killed hundreds of his subjects and was also known as Vigo the Cruel, Vigo the Torturer and Vigo the Unholy.

To match this specific, very evil theme, I looked for a beer brewed with just as much passion that Vigo himself carried within his soul. Something tempting yet terrifying, delicious and desirable, a perfect blend of Heaven and Hell.

To match this theme I chose a beer that Vigo himself would choose if he were a craft beer fanatic: Inferno Ale by The Lost Abbey. 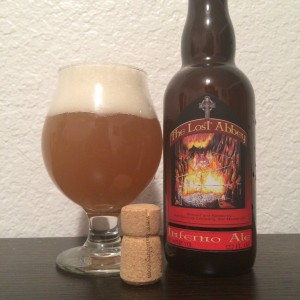 Inferno Ale is a Belgian Strong-Pale style beer offered in both 750 and 375ml bottles. This beer is set to remind you that your mind, body and soul are no longer yours. Your destiny has been cemented in sin, and you gladly oblige with every beautiful sip. This beer bottle states, “At least Satan serves beer in Hell. He brews it himself in that flame stoked cauldron.” It continues, “Rumor has it the beer is straw yellow, bone dry and simply labeled Inferno.” While Vigo looks to unleash his own brand of Hell upon Earth, I think only a beer of the same devilish magnitude could accompany this terrifying takeover.

Inferno is a beer that The Lost Abbey Co-Founder and Director of Brewery Operations, Tomme Arthur, states might be the one Lost Abbey beer he drinks most often. Inferno clocks in at a heinous 9% ABV and packs a bit of a punch to the senses. Literally exploding with carbonation, this beer has very smooth opening followed by a spicy and dry finish. It delivers a bit of an alcohol bite but is never overwhelming. Many flavors ranging from malty sweet all the way to spices and of course some funk mingle to create a devilishly tantalizing beer, worthy of sinners and saints alike and the perfect accompaniment to an attempt at world domination. 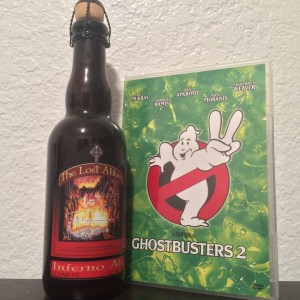 When we last saw our four heroes, they had just finished saving New York (quite possibly the world) from pure destruction. You would think things would continue just swimmingly. Business was booming, people obviously believed in their abilities, heck, it even appeared as though Venkman had got the girl. Unfortunately most times things aren’t quite what they seem.

When Ghostbusters 2 opens, you see our four heroes doing anything BUT fighting the supernatural spirits encountered in our first adventure. After conjuring up a 100 foot marshmallow man set on devastation, blowing the top levels of a New York City high-rise to oblivion and being sued by basically every agency in the state, it would be hard to stay on top for very long. If all that wasn’t bad enough, Venkman’s “girl” had a baby with another dude. Talk about kicking a guy when he’s down.

But of course, when things start heating up in New York yet again, who you gonna call? Ghostbusters, of course. But it’s not as easy as it seems for our heroes.

While illegally investigating an unexplained happening involving Dana’s son Oscar, the Ghostbusters find a massive river of pink slime flowing underneath the city. While trying to obtain a sample of this goo, Ray is attacked causing a city-wide blackout. Again, landing the boys in some hot water and in court.

The Ghostbusters are found guilty of investigating the supernatural, but before they can be taken out of the courtroom Judge Wexler decides to give them a true piece of his mind. This outburst leads to the slime, which was brought in to court as evidence, to come to life and spring forth the dreaded Scolari Brothers – convicted murders given the chair by none other than Judge Wexler. In exchange for all charges to be dropped, the Ghostbusters trap the killer spooks and can continue to work on the real problem at hand. Vigo the Carpathian!

Vigo the Carpathian is a super powerful sixteenth-century sorcerer tyrant, who was killed at the ripe age of 105 by way of being poisoned, shot, stabbed, hung, stretched, disemboweled, drawn and quartered. Powerful was an understatement. Vigo seeks a child he can possess which will allow him to return to life and bring his own brand of hell back to the modern day world. To do this, he enlists Dana’s creepy art buddy, Janosz.

After the slime attacks Dana and Oscar in her apartment they go to stay with Venkman while the others investigate the slime that is flowing under the streets. They soon realize that it reacts to emotions and was more than likely created due to the negative attitudes of New Yorkers.

A spirit resembling Janosz soon kidnaps baby Oscar taking him to the museum so that Vigo can transfer into his body and come back to life.

Our heroes soon realize that they need a huge charge of positivity to take down the evil Vigo, and turn towards possibly the largest symbol of positivity that no New Yorker can deny – the Statue of Liberty. The boys use a positively charged slime and the hot track “Higher and Higher” to animate the statue and go rescue baby Oscar and again, the world.

Will the Ghostbusters be able to save the day yet again? Will they finally gain the respect of their fellow New Yorkers? Better sip on my perfectly paired beer, sit back and watch for yourselves.

The Good – Much like Ghostbusters 1, the list of favorites is too long to mention. The writing is yet again top notch and the jokes hit as hard now as they did first time watching. The story is engaging and the action is yet again just as fun of a ride as the original film. And of course, the characters. They continue to evolve and keep you engaged and pull you in to actually care about where they have been and where they might be going. Including in Part 2, the evolution of Louis who is a righteous character in his own right. This movie is aces in my book.

The Bad – Dana’s art buddy is beyond annoying. I know this was probably done on purpose to make him unlikeable, but hes less likeable than chicken pox or book reports. I think they could have put a weasel character in that role that would have at least been tolerable. Also bad, they never got around to attempting a Ghostbusters 3.

Overall – Maybe not as classic as the original, but most sequels aren’t. It still lives up to the fantastic story and hilarious comedy that you would have expected from a second and final installment of this series. Another absolute classic in comedy and a gem by Aykroyd and Ramis. A movie I can, and will watch for as long as my mind can stand it.