For the next installment of the growing weekly collaboration between bloggers, the blog team has doubled to bring you – Movie & a Beer featuring Back to the Future 3. Join us as we collectively pair a beer with, and talk about the final film of, in our opinion, the best trilogy to ever exist.

I am really excited to continue this collaboration series with Dr. Gonzalo Quintero of Craft Beer Tasters LLC and Eugene Abano of Reviews Galore, as well as our new bloggers to the series – Jen Van Tieghem of Sounds in San Diego, Zack Norris and We Unite – Please click their respective links to read each of their reviews and pairings on the film.

When pairing a craft beer with Back to the Future 3, I wanted to choose something that would fit the feeling of the film, as well as something that could be enjoyed in the Old West and in present times.

We all know that in BTTF3, they pour whiskey. Well, at least in Old West Hill Valley they do. So, a beer that could match that mindset was definitely in order. Something I could sip on slowly over a longer period of time and not feel too weighed down. I mean, we are in the Old West in this installment. You never know, we may need to hitch a ride on a speeding train or gallop away on a horse.

Much like the movies themselves, which are all bursting with subtle references to each other, I felt that this nod could be done in my beer pairing as well, adding to the overall feel of the movie and beer mixture.

In Part 1, after Lorraine’s father hits Marty with his car they take him in and she decides to take care of him and make sure that he is going to be okay. Let’s be real, he got hit by a car, it’s not that odd. This results in some particularly strange feelings from Lorraine towards Marty, which leads to the rest of the story unraveling. Doc then tells Marty that this specific “condition” is called the Florence Nightingale Effect. Doc says, “It happens in hospitals when nurses fall in love with their patients.” The specific term Florence Nightingale Effect was appropriately coined thanks to Sigmund Freud.

Now, when we want a craft beer that fits not only the time period of the movie but also gives a subtle shout out to a major piece of the trilogy, where do we reach?

I reached for Freudian Sip – American Strong Ale aged in bourbon barrels by Rough Draft Brewing Company. Clocking in at 10% ABV, this beer is deceptively smooth and drinkable, unlike some barrel-aged stouts that can hit like a jackhammer. Even with its scent, which is strong enough to drop a lovesick scientist, it is mellow in all the right ways allowing you to enjoy more without getting too weighed down. Accompanied by a delicious, deep flavor from the bourbon-soaked oak barrels in which it aged. Easy to drink on those hot wild west days, yet still delivering the bourbon flavors and booze you may desire after a long day of robbing stagecoaches and fighting yellow bellied pie-slingers.

Rough Draft Brewing Company Freudian Sip is a great, drinkable bourbon aged ale and I think it would be safe to say even Mad Dog Tannen himself would choose this over any average bottle of $5 Kentucky Red Eye when sitting by the fire under the starry sky. 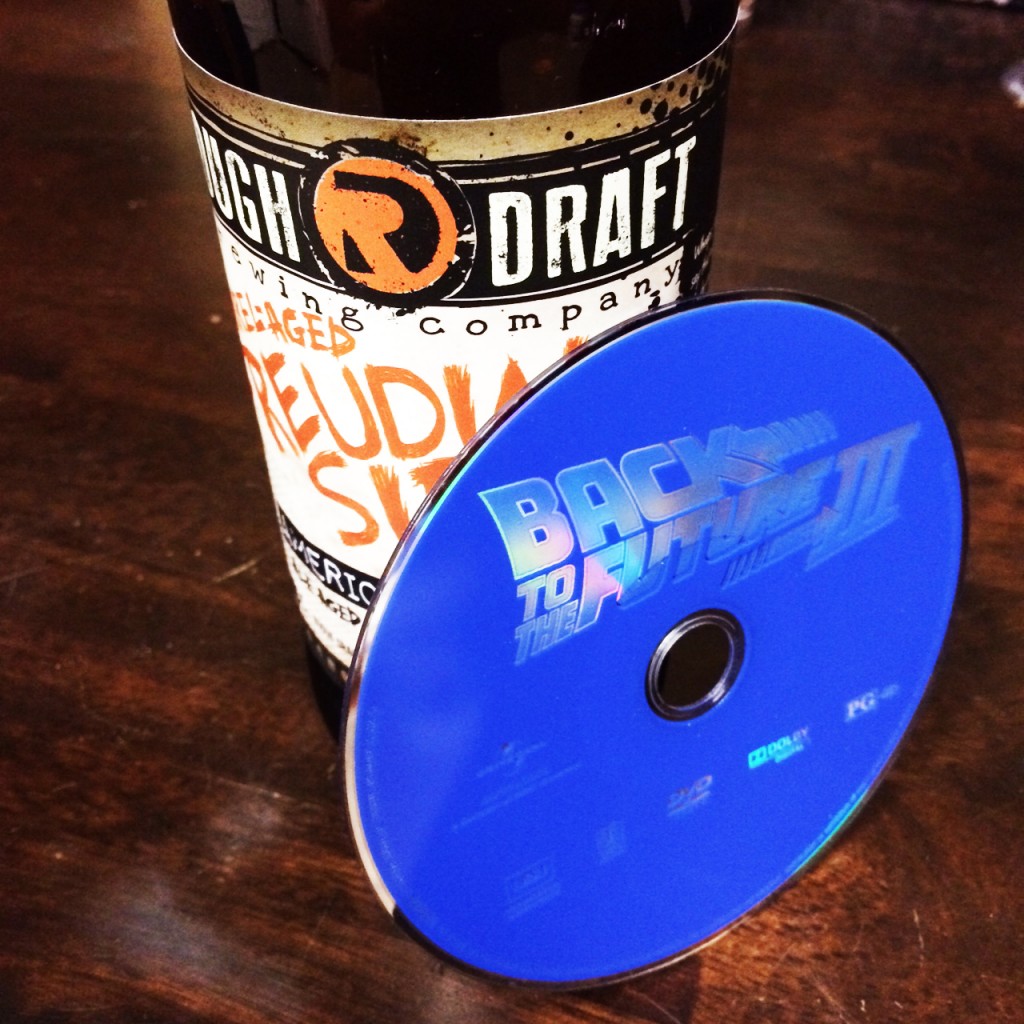 Much like Back to the Future Part 2, Part 3 opens up right where the second film left off. Just when we all thought things would finally be okay in Hill Valley, past, present and future, lightning strikes twice. This time, it’s not the clock tower that’s in the way. The last time we saw the Delorean, it was being struck by lighting in 1955, right after Marty retrieved the book, Gray’s Sports Almanac, from Biff. Marty then takes the almanac and burns it, returning things back to, what appeared to be, normal.

Soon after Marty burns the almanac, a Western Union car delivers a note to Marty at the scene of the lighting strike. The delivery is a note from Doc, which reveals that the strike of lightning sent him and the Delorean back to 1885 where he has been living a rather normal life in the Old West. Marty then runs to find 1955 Doc, who had just sent Marty back to 1985 and Doc goes into shock.

Doc’s note, in Back to the Future Part 3 instructs Marty and 1955 Doc where he has hidden Delorean and instructions to fix the shorted out time circuits so that Marty can return safely home to 1985. Doc also tells Marty not to even consider coming to 1885 to find him, stating he is happy as a clam living as a blacksmith in the Old West. Why would Marty return then, you ask? While Marty and 1955 Doc are working to uncover the buried Delorean, Copernicus (Doc’s dog) finds a tombstone for Emmett Brown, erected only a week after Doc sent the note. “Shot by Buford Tannen over a matter of $80.” Once discovered, Marty vows to go back to 1885 and bring Doc home.

As stated in my previous BTTF article, I am a die-hard fan of this trilogy. I have heard many people say that Part 3 is not very good, and how it’s the worst of the three. Whatever. Back to the Future 3 takes the story we have come to expect and turns it on its head in a brilliant way, all the while including wonderful nods to the other two films. (Example – The manure hauling company in 1955 who’s truck Biff runs into during his first fight with Marty, is noted as “D. Jones Manure” and in 1885, he runs into a cart of manure, which is noted as “A. Jones Manure.” I HATE MANURE. Also, there’s the brilliant reference to the Clint Eastwood movie A Fistful of Dollars that Biff is watching in his Jacuzzi in BTTF Part 2.)

Now of course, we have familiar scenes that we all expect to see in these films such as Marty waking up in a room with his mother taking care of him, or in this case a distant family member of the McFly family, who looks like his mother (and is played by Lea Thompson). Also, we have the ever-famous encounters with Marty and a Tannen (Part 1- Biff, Part 2- Griff, Part 3- Buford) but this time, instead of a café it occurs in an Old West saloon.

One of the many brilliant things I see in Part 3 is yet again, the writing. As I said in my last feature, we are reminded that Marty is still in fact a teenager in these films and Doc must find a way to help him out of jams time and time again. In Part 3, when Doc and Marty are checking out the bridge, they save the life of Ms. Clara Clayton a new schoolteacher in town. Doc falls in love at first sight, and we are forced to forget everything we once knew about our time travelers.

Doc has always been the adult figure in the previous films and Marty the teenager in trouble, but the tables are turned on us in Part 3 and Marty must now become the mature adult-type figure to take care of Doc and keep his mind on the prize – Escaping 1885! Completing their role reversals, we see Marty and Doc switch their trademark sayings in Part 3. Doc is caught saying the “This is heavy”, and Marty exclaims the iconic line “Great Scott!”

After hijacking a train in the name of science and narrowly surviving a duel with “Mad Dog” Tannen, Marty is able to reach 88MPH and return to 1985 on the train tracks in Hill Valley. Soon after returning, we see the Delorean smashed to absolute smithereens.

In another showing of Marty finally growing up and learning from his lessons, we find him about to drag race in his new Toyota truck against Needles (A race which we learned in Part 2 sends Marty’s world into a downward spiral. As the race results in a severe crash with a Rolls Royce and he loses his guitar playing ability, smashing all his dreams.). Trying to get Marty to race him, Needles pushes the ultimate button by calling Marty “chicken”. But Marty has learned better, and the future isn’t written yet. So he sets his car in reverse instead of racing Needles, preventing the accident from ever occurring.

Even though Marty left Doc behind in 1885, that’s not the last we will see of him. Oh no, how could you think so? Doc, going against all he said about time travel becoming too painful, shows up in crazy style with his brand new time train. Marty and Jennifer meet the new Brown family and Doc leaves, closing the trilogy saying, “Your future hasn’t been written yet. No one’s has. Your future is what you make it, so make it a good one.”

The Good – Again, the writing. Brilliant nods to previous films and the way they swap roles in the film is perfectly done. I love that the setting is in the old west and the hilarious old west lingo. (“Duded up, egg sucking gutter trash!”) Also the time train is unstoppably cool and takes time traveling to the next level. ZZ Top rocking the town festival is awesome too.

The Bad – The destruction of the Delorean is heart breaking for me to see.

Overall – I think this was a perfect close to a perfect trilogy. 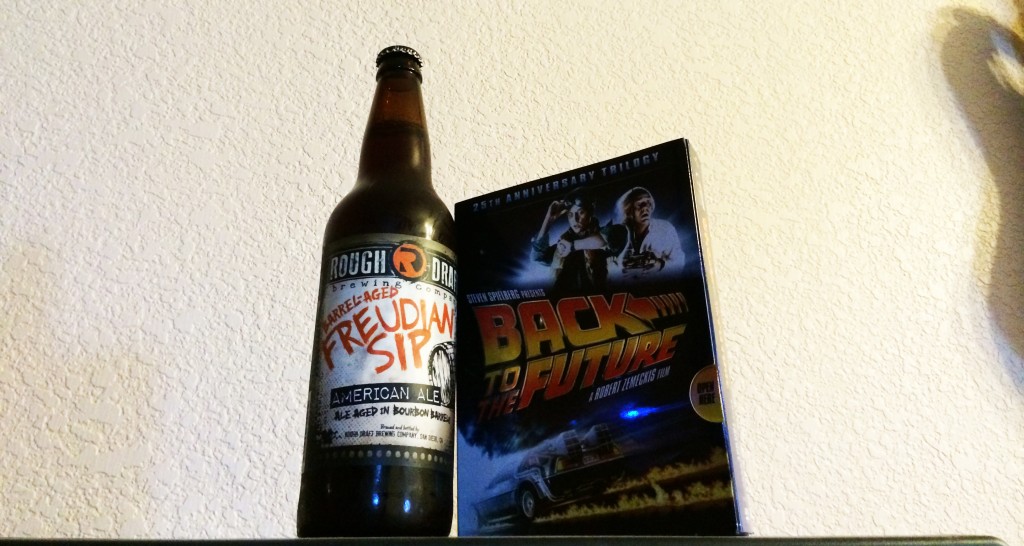