Our team of blog writers is teaming up again to bring you yet another classic series. This time we are taking on the iconic Indiana Jones movie series, while pairing them with our perfect craft beers. Join us as we collectively talk about and pair beer with one of the best action adventure film to ever grace the silver screen.

Like previous Movie and a Beer features (1, 2, 3 & 4), I will be pairing a craft beer that matches one or more of the themes of the film, as well as keeping it a local pick to stand with Three B Zine’s daily theme of Living Local.

Raiders of the Lost Ark came to life thanks to George Lucas’ desire to create a short subject, AKA serial film, based on the ones he knew from the 1930s and 1940s, arguably the beginning of the Golden Age of Cinema. A serial film was a segmented film that would play along with a major motion picture and were pictures broken up into “chapters”. Each chapter would tend to be action adventure and would typically end with the characters in precarious situations with little to no chance of survival.

Because this movie was a nod of sorts from Lucas towards the Golden Age of Hollywood, only one beer really struck me as an appropriate pairing with the film. A beer from a city that helped ring in the Golden Age of craft beer, America’s craft beer capital San Diego. That beer happens to be Golden Age from Iron Fist Brewing Company located in Vista. 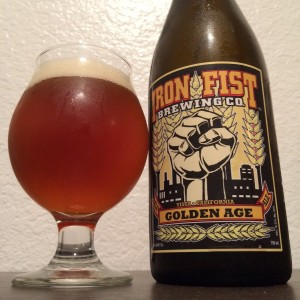 Golden Age is a Golden Strong Ale clocking in at a generous 9.2% ABV, and is a solid offering in an iron clad line up of great beers from Iron Fist Brewing Company. Once you pop open the 750ml bottle, the beer explodes to life with, as Iron Fist says, “…mesmerizing march of perfect champagne-like bubbles.” These bubbles continue to dance up the inside of the glass with each and every sip. This “champagne-like” life leads me to believe this beer would be the perfect way to cheers to a job well done, or toast to the many adventures yet to come.

Golden Age has a crisp bite to it, and a subtle warming factor due to the alcohol level. Flavors burst to life with each sip ranging from banana, to malt sweetness down to the flavors of crisp, ripe apples. The sweet flavor lingers and finishes a tad dry, definitely leaving you to desire more. This highly enjoyable and classy craft beer could have been something that would have been shared and sipped by some of our earliest movie stars at parties, award shows or even after a wrap on a movie set. I now know what I will reach for the next time I need something warm and full of flavor to toast my fellow explorers before my next adventure.

Taking place in the 1930’s, a time one can assume that when ladies and gentleman had a drink they reached for something with a touch of class, and adventurers reached for something with possibly a bit higher an ABV to help them relax and take the edge off after a long day. I chose something that I think fits both bills equally. With its bubbly mouth feel and wonderful fruit tones, teamed up with a blast of strength, this is one beer that will give you the courage to outrun killer boulders, take on evil armies and save the day, and look classy while doing so. 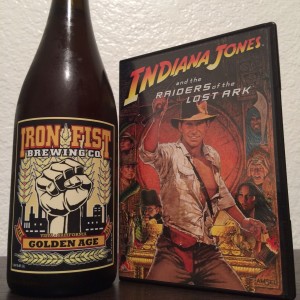 Indiana Jones – Raiders of the Lost Ark is an action adventure film directed by the iconic Steven Spielberg with another movie icon, George Lucas, serving as Executive Producer. As mentioned above, it is said that the plot itself originated from Lucas’ desire to recreate a short subject story otherwise known as a serial from the Golden Age of cinema, by using modern movie making techniques.

The film stars and actor who I consider one of the luckiest movie stars in the modern era of movie making; Harrison Ford, as title character Indiana Jones. I don’t know about you, but I would feel like the luckiest actor if I were cast as not only Jones, but also Han Solo. Just a thought. 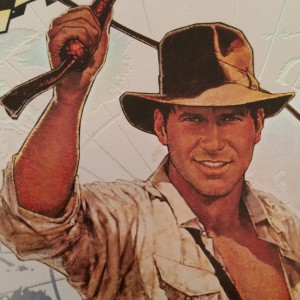 Often ranked as one of the absolute best films in the Action-Adventure genre, Raiders also brought on three more films in the series, a number of off shoot projects and even an instant classic adventure attraction at Disneyland Resort in California.

Raiders starts off with Indie successfully acquiring a golden idol, nearly surviving the booby traps that have claimed many adventurers before him, including of course one of the most iconic “run for your life” scenes ever filmed – the rolling boulder. After barely escaping what appeared to be sudden death due to flattening, he finds himself face to face with a number of arrows ready to strike him if he showed any sign of movement at the command of rival Rene Belloq. This opening sets the tone for the amazing adventure that is yet to come.

While working as an instructor at Marshall College, Jones has been told of the Nazis’ plan to find the long lost Ark of the Covenant, which they believe will turn Adolf Hitler’s army invincible. To find this Ark, they must acquire the headpiece to the Staff of Ra, which is the key to finding the Well of Souls – a place believed to hold the Ark.

Jones is dispatched to find the headpiece, which is now held by his ex lover, Marion. And of course, as Jones arrives to Marion’s bar to claim the piece, so do the Nazis. A fight breaks out and the bar is set ablaze but Jones and Marion escape with the piece and flee to Cairo and team up with Sallah who can help them find the hidden well and then the Ark.

Soon, Jones and Sallah are able to break way into the Nazi dig site and successfully locate the Ark, but not for long. Belloq and the Nazis find them and take the Ark from Jones and throw him and Marion into the Well of Souls, which just so happens to be filled with deadly snakes – Jones number one fear.

But, neither snake nor sealed-pit can hold an adventurer of Indiana Jones’ expertise. He and Marion are able to find their way out of the well and to nearby airstrip where he is able to take the Ark back from the evil Nazis, but not for long.

Belloq and the Nazi army are able to intercept Jones and the Ark and they take him and Marion hostage while they decide to put the power of the Ark to the test before presenting it to the evilest of all evil, Hitler.

After all this back and forth, is this the end for Jones? Can he and Marion somehow escape while stopping the Nazi army from utilizing the power of the Ark? Or will they destroy mankind, as we know it? Forget for a second that they made 3 movies after this and let your mind drift, alright?

The Good – Non-stop adventure and action. This movie and the story never give in and keep you on the edge of your seat for the entire film. This might just be the best movie of its style ever filmed and has definitely stood the test of time. It also spawned one of the best action adventure attractions ever built, at Disneyland, so now fans young and old can live the true adventure of the films. Plus the Indiana Jones theme score is one of the most fun themes that will get you riled up any time you hear it. It is also great when you see the Nazis get all burnt up and die a horrible death! Win.

The Bad – I didn’t necessarily grow up with these movies like many others my age did, so I am missing some of the nostalgia from the series. The them of back and forth…I have it, now you have it, no now I HAVE IT, is kind of on the goofy side but the movie as a whole is pretty untouchable.

Overall – It’s a classic and a standard which other action adventure movies must attempt to match. It is an iconic character and story that will stand the test of time and will continue to mesmerize audiences of all ages for as long as movies are watched.