Our adventurous team of bloggers is back yet again to continue our work on the classic Indiana Jones film series. This time – Temple of Doom! Join us as we collectively talk about and pair a craft beer with the second film in this iconic action adventure film series!

Like previous Movie and a Beer features (1, 2, 3, 4 and 5), I will be pairing a craft beer that matches one or more of the themes of the film, as well as keeping it a local pick to stand with Three B Zine’s daily motto- Live Local.

In Temple of Doom, our hero Indiana Jones finds himself in situations that are more life threatening than in our previous adventure. Defying death at every turn and not only trying to save himself, but others as well.

I wanted to call upon these terrifying experiences and pair them with my perfect local craft beer. Something that can give you an edge and possibly some added courage in the heat of the moment, but also something that can help you leave the past behind you and look towards the future with hope and faith that things will always be okay. As in all epic tales, there is a good and an evil. I also wanted to pair this beer with not only the good guys, but find something that the evil doers might want to sip on while unleashing Hell onto the Earth.

How could I make this happen? I asked myself the same thing, until I came across what I feel is the absolute perfect craft beer for this film, and any similar situations. The beer I chose – Shark Attack Double Red Ale from Port Brewing Company. 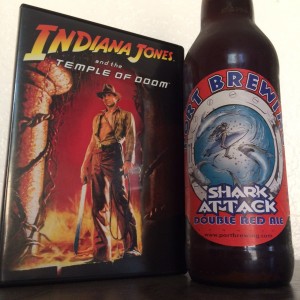 Port Brewing Company website describes Shark Attack as “…the perfect compliment for when you’re surrounded by danger, or celebrating when you survive.” Really, pairing notes can end right there. No further description needed. But I will continue. Shark Attack Red Ale is in fact the perfect beer for many occasions, including when you are fighting for your life when it is being strangled in the hands of evil, but it also pairs perfectly if those hands are yours.

In Temple of Doom, Indiana Jones is forced to drink a potion called Blood of Kali – A blood red potion that will put you into an unbreakable trance serving an evil ruler the likes many of us have never seen. Enough said.

Shark Attack by Port Brewing is a beast of an ale. It is a double red ale as mentioned before, brewed in a classic west coast style. Measuring in at a whopping 9.5% ABV, this double red is brewed with the classic west coast style in mind, meaning along with the smooth malt flavors, it is hopped to the max bringing this beer into a whole new dimension. Co-Founder and Director of Brewery Operations Tomme Arthur, says on the Port Brewing website that this is, “…a stronger more robust version of the original Shark Bite red ale.” A beer he says is one of the founding red ales in the San Diego brewing scene.

Shark Attack is brewed using very specific imported Crystal Malts which are used to not only give the beer its distinct roasted, caramel flavors but also lends a hand to its wonderful deep red coloring. Generously hopped with only Cascade and Centennial hops, leading to a slightly spicy hop flavor to start, finishing with a delightful citrus flavor mingled in with the obvious sweetness from the malts. Beautifully balanced and highly drinkable even with its higher ABV and high malt presence, and a perfect companion on any daily adventure. 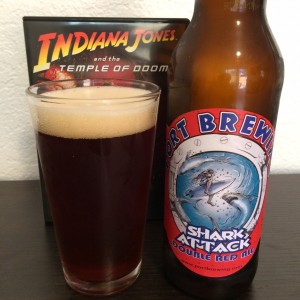 Temple of Doom opens with Indiana Jones showing up at a nightclub owned by Lao Che and stirring up his famous brand of trouble. This encounter leads to him being poisoned, his friend being killed and Jones barely escaping with his life. Of course, he does get away thanks to his trusty young sidekick Short Round. Together, with nightclub singer Willie Scott, they steal a plane to leave the country, only to find out the plane itself is owned by Lao Che.

After being left for dead, again, in a plane with no fuel or parachutes the three use a raft to survive jumping from a falling plane, and falling off a mountain into a river. It would have to be perfect, you know? This lands them floating down a river near a village in India.

They are found and taken to a village. The people living within help the group and feed them. The villagers believe that Shiva, whom they have prayed to for help, sent Jones to them so he could help them retrieve their Sivalinga stone – A sacred stone that protects the village. Indiana, Short Round and Willie must travel to Pankot to find the stone. Jones soon comes to the conclusion that this stone must be one of the five Sankara stones, promised to bring fortune and glory to its holder.

Upon arrival to the Pankot Palace they are greeted by the Palace Prime Minister and are treated to a lavish feast of snakes, bugs and eyeball soup. During the meal, Jones and Prime Minister have a minor verbal altercation, convincing Jones there must be more to what is going on.

Later that evening, Jones is attacked in his bedroom, which proves furthermore something is definitely going on in these parts. He soon finds a hidden tunnel in Willie’s room, which leads them down into a bug infested and booby trap-laced cave. Once in the cave, Jones and Short Round are nearly crushed and impaled by some nasty spikes after being locked in a stone room. Willie, finally getting over her ridiculousness and comes in at the last minute to save their lives.

At the end of this long cave, they come across a temple where the Thuggee worship Kali by way of human sacrifice. Here, they witness a prisoner have his heart ripped out of his chest and dropped into a sea of fire where he burst into flames. At this moment, the trio figures out that their leader, Mola, is in possession of three of the five Sankara stones.

Just when Indiana swings down, swipes up the three stones, you think he will be able to high tail it out of there and save the day. But no, it’s never that easy! Willie and Short Round are taken hostage as well as Jones not long after. They see inside the mine that the Thuggee have enslaved the village children and the young Maharaja, to help mine for the other 2 lost stones.

Jones is tied to a statue and forced to drink the Blood of Kali – a potion that will put him into a trance called the Black Sleep of Kali-Ma and as a result, will force him to serve the leader Mola blindly.

After, Jones helps load Willie up to be the next human sacrifice. Short Round is able to escape his shackles and uses a hot torch to burn Jones and snap him out of his trance. The three, finally free, escape with the three stones and free the children.

After a long and intense mine cart chase, the trio finally emerges into the sunlight. Almost free, the only thing standing in their way is a sketchy looking rope suspension bridge. Of course, the river below is swarming with angry crocodiles. Surrounded on both ends, Jones does the only thing he thinks he can and cuts the rope in the middle sending the bridge crashing into the mountainside. While holding on for dear life next to Mola, Jones calls upon Shiva for Mola to answer to using his power inappropriately. This causes all three stones to engulf in flames and burn the bag in which they are held.

Will Jones be able to make it out of what looks like sure death? Or will Mola rip his heart out and throw him to the crocodiles below? Better open one of my perfectly paired beers, sit back, and enjoy the ride.

The Good– Temple of Doom takes what we know and love from the first film and builds on it making it more adventurous, more life threatening and more extreme. Loaded with edge of your seat action as well as parts that make you jump, it has everything you want in a classic action film. The addition of Short Round is great and his banter with Jones is funny and never become tired or old.

The Bad– Willie is, in my opinion, beyond unlikeable throughout the film. At the end she does come around and things warm up, but by the time you care the credits are rolling. I understand the movie can probably be considered “family entertainment” but the scene where the heart is being ripped our of the man’s chest could have been much more gnarly and intense. Tame, but not so bad.

Overall– Much like the first film, (as well as the others we have reviewed in this collaboration series) are all top shelf classics and understandably so. Temple is no different. If anything, it takes what we had hoped to see in a sequel and takes it over the top and even more adventurous and exciting. This is how a sequel should be done. The movies mix of dark scene and funny elements mend perfectly creating well balanced iconic film that will continue to be a favorite for generations to come.