Hold on to your hats a glasses folks, your team of bloggers is back to finish up the original Indiana Jones trilogy series with Movie and a Beer! Join us as we collectively talk about and pair a craft beer with the second film in this iconic action adventure film series!

As in previous Movie and a Beer features (1, 2, 3, 4, 5 and 6), I will be pairing a craft beer that matches one or more of the themes of the film, as well as keeping it a local pick to stand with Three B Zine’s daily motto- Live Local.

When The Last Crusade opens, we find ourselves deep into an Indiana Jones flashback. In this flashback, (back in 1912) we see a young Jones stumble upon a dig site where a group of real goony looking dudes uncover something called the Cross of Coronado. It is said that this cross once belonged to Francisco Vásquez de Coronado. Now, whether this cross actually existed in reality is a whole different story for a different day.

It is said in the film that acquiring the Cross of Coronado and putting it into a museum was one of Indiana Jones’ life goals, a goal that he finally achieved in 1938. After losing the cross to that creep in Utah (with his father being no help, mind you), he found himself on a ship off the coast of Portugal many years later, fighting to get the cross. He does, and the fight results in the sinking of said ship. As the ship burns and sinks, it is revealed that the ship itself was named Coronado.

Now, if you ask me, not seeing this life long dream being achieved would be a sin. In honor of Indiana Jones’ great triumph, saving and immortalizing the Cross of Coronado, I decided to pair this film with none other than Islander IPA from one of my favorite breweries in San Diego – Coronado Brewing Company. 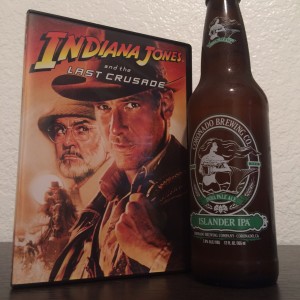 Coronado is Spanish for “the crowned one” (consider C.B.C. Crown Series beers), which to me means it is obviously something special, something to be treasured. Islander IPA is just that. Coronado Brewing Company says that Islander is named after Coronado Island to show their hometown pride. They also describe that it’s “explosive burst of piney bitterness and luscious notes of apricot, grapefruit and mango that are sure to evoke imagery of swaying palms and sun-kissed shores.” In other words, this beer can bring to life many peoples’ life long dreams – paradise.

Islander IPA clocks in at 7% ABV and is brewed up with a mix of Chinook, Centennial and Columbus hops, delivering a fantastic burst of citrus, grapefruit and some piney hop flavors. Cascade and Centennial, widely popular hops, both known for their citrus and flowery aromas and flavors, mix in perfectly with the spicy and bitter flavors of the Chinook. This mix creates the up front and back end flavors of this wonderful IPA. Not a hop bomb by West Coast standards, but still packs a strong hop punch in an ale that is highly drinkable and balanced perfectly.

Islander IPA is one of my local favorites and a solid go to during any occasion. Whether you are relaxing on one of the prettiest beaches in San Diego, having a BBQ with your best buddies, or fighting for your life and about to fall over a cliff in a tank, rest assured that Islander IPA will always treat you like a king. 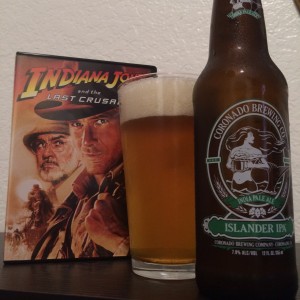 The movie opens up with a young Indiana Jones in 1912 coming across a dig site where a group of goofy cowboy types, and a suspicious looking “Indiana Jones” type guy discovering the Cross of Coronado.

Believing that the cross belongs in a museum, young Indiana steals it and tries to get away. As seen in previous films, this isn’t really Jones’ strong suit, and he is soon caught. This results in a pretty fun chase scene though a circus train. In this scene, we learn not only how he became terrified of snakes, but also how he gained his ability to use a whip in times of danger.

After returning home, the goons appear at his doorstep with authorities and take the cross back. His father, who we haven’t seen fully on camera quite yet, doesn’t even come out of the back room to see what’s happening. Fresh out of the flashback, we catch up with Jones, who is on a boat trying yet again to steal the Cross of Coronado for a museum. He is able to recover the cross and the boat, Coronado, sinks. Jones finally gets the cross into a museum.

Indiana is soon introduced to a man named Walter Donovan and he is told that his father, while in search of the Holy Grail, has gone missing. He receives his father Henry Jones’ travel diary, which catalogs all of his adventures, including his search for the Grail.

Indiana travels to Venice and meets up with his fathers colleague Dr. Elsa Schneider. In the library where his father was last seen, Indiana discovers a tomb underneath the main floor which holds a an inscription telling the precise location of the Holy Grail – a full version instead of the only half tablet that Walter possessed. 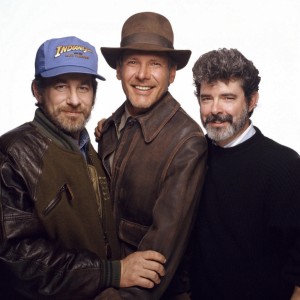 Indiana and Elsa run from the tomb after almost drowning when a secret society set out to protect the Grail try to stop them. They escape by way of speedboat, but not before they are shot at, chased and almost chopped to death by a massive propeller. Indiana takes Kazim hostage – the leader of the Brotherhood of the Cruciform Sword, a group looking to protect the Grail by all costs, Jones tells him he’s not interested in acquiring the Grail, but finding his father, so Kazim tells him where to find Henry.

Indiana finds Henry, but as they escape he finds out Elsa and Walter are both Nazis, and she steals the diary from his pocket. After kidnapping Marcus (a friend of the Jones’) the Nazis acquire the map leading to the Grail. The Jones boys are able to barely escape a burning room and get out of reach of the Nazis, for now.

The Jones’ travel into the heart of the beast, to Berlin, to recover the diary from Elsa at a Nazi rally, where they run into the worst enemy the world has ever seen – Hitler! Once aboard a Zeppelin leaving Germany, they go over the three challenges, aka booby traps before the Grail. The Zeppelin turns around toward Germany, and the Jones boys escape by way of biplane. During a dogfight, the elder Jones takes down his own plane, but manages to get away.

In exchange for a Rolls Royce, the Sultan of Hatay gives the Nazi team a bunch of equipment to help them recover the Grail. While traveling by tank, they are ambushed by the Brotherhood from the beginning of the film. Marcus and Henry are taken in the tank and Indiana goes after them, resulting in the tank falling over a cliff. They think for a minute that Indiana went down with the tank, but he shows up, barely able to stand on his own after the fight.

Indiana, Henry and Sallah find the rest of the Nazi team who are ready to enter the temple where the Grail is held, but can’t get passed the three booby traps. After Indiana refuses to help Donovan recover the Grail, Donovan shoots Henry.

The only way Henry can be saved now is Indiana recovering the Grail, and having him drink from the cup. Will Indiana risk his life to recover the Grail? Will he be able to maneuver through the three booby traps and save Henry? Will the Nazis prevail and let darkness spread over the world? Or will Indiana save the day? Better sip one a few of my perfectly paired beers and find out for yourself, in this end to the iconic Indiana Jones original trilogy. 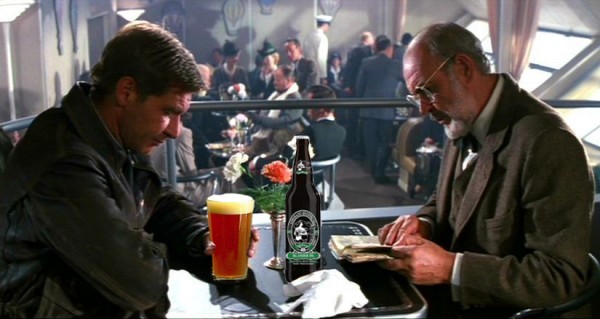