Hold on to your seats, readers! Your team of bloggers are locked and loaded this week bringing you a brand new Beer and a Movie feature! This week, we attack the classic 90’s Sci-Fi adventure, Starship Troopers. Join us as we collectively talk about and pair a craft beer with this awesome action film!

As in previous Movie and a Beer features (1, 2, 3, 4, 5, 6 and 7), I will be pairing a craft beer that matches one or more of the themes of the film, as well as keeping it a local pick to stand with Three B Zine’s daily motto- Live Local.

I will be honest here, when thinking of a perfect beer to pair with Starship Troopers, one of my favorite movies from the late 1990s, I had a hard time deciding on which beer would make the cut. I came across a few here and a few there, but none of them seemed to fit a movie that meant a lot to me as an early teen. I wanted to pair this right, do the movie and the beer justice. Usually I explain why I chose a specific beer, but this time I want to name the beer then explain why I chose it.

I paired Starship Troopers with the latest collaboration project between Stone Brewing Co, Beachwood Brewing and Heretic Brewing Co – Unapologetic IPA. Why choose this beer? Well it struck me in multiple ways.

The first way it struck me was the fact that this beer is a collaboration between three California breweries, collectively fighting the evil that is mediocre junk beer. These three breweries have teamed up to create a knockout attack on the senses in an IPA that is very strong and they are not sorry about that.

In Starship Troopers you are presented with an Arachnid threat, and we find our heroes also come in a set of three – Rico, Dizzy and Ace. These three are a solid team, fighting the evil that is the Arachnid threat on far away Klendathu to save the future of humankind.

This IPA is also, as stated before Unapologetic for being strong and for being yet another IPA in a world full of IPAs. Our heroes as well, find themselves completely unapologetic for the way they handle the threat in far away space. Rico and Dizzy both had their families wiped off the planet and they have no regrets in retaliation, and no apologies.

Unapologetic IPA also combines new and experimental hops to create a double IPA that is bitter and fruity thanks to Azacca, Belma and a still unnamed varieties from deep within Washington’s Yakima Valley, creating a beer that is extremely hop forward and although an IPA, somehow unlike any others out there. Our heroes in the film must travel deep into Arachnid territory, a far away place, to conquer the threat on mankind. Funny how that worked out, isn’t it?

As you can see, there are many reasons Stone/Beachwood/Heretic Unapologetic IPA pairs perfectly with this film.

Who says we need another IPA? These breweries do, and it is definitely not your typical, run of the mill bunk IPA. Stone/Beachwood/Heretic Unapologetic IPA is a fantastically hop forward beer bursting with pine, tropical fruits and hop resin. No doubt about it, this beer is delivers a nuclear blast of hop flavors with a nicely balanced malt profile…at a bold 8.8% ABV. Another great collaboration and I am not one bit sorry I decided to pair it with this film. 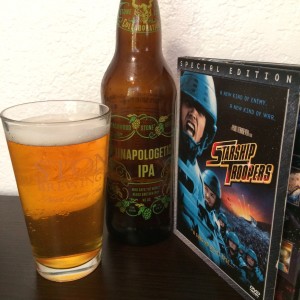 Starship Troopers is a sci-fi action film released in 1997 and directed by Paul Verhoeven. The film is a campy, yet epic story told in a very satirical fashion. Director Verhoeven said in an interview with A.V. Club in 1997 his use of irony is, “playing with fascism or fascist imagery to point out certain aspects of American society… of course, the movie is about ‘Let’s all go to war and let’s all die.'”

Starship Troopers is done in the exact style that you would hope for a movie of this nature. Tons of action leading to excessive gore, incredible Sci-Fi elements of space and “alien” type life forms, good looking ladies and of course, intense levels of overacting. Combining all the great elements necessary for a classic action film, if you ask me.

The film follows main character, Johnny Rico – a young good looking athletic, nice guy through a futuristic world where travel and exploration into deep space is a common occurrence. In this new Earth Federation, citizenship is granted by serving the Federation, often by joining the military. Citizenship gives members specific rights in the Federation, voting being one of them. While attempting to settle on distant, new planets, humans discover a species referred to Arachnids, or simply Bugs.
Meanwhile Rico, his girlfriend Carmen Ibanez, and good pal Carl Jenkins go to High School together in Buenos Aires. Dizzy Flores, another student attending the same school, is infatuated with the chisel jawed Rico, but he doesn’t share her feelings. After graduation, everyone in the group enlists in to Federation, including Dizzy. Carmen goes into training to become a space pilot. Carl goes on to join Military Intelligence. Rebelling against the anger his parents had shown to just the thought of joining, Rico goes ahead and enlists in Mobile Infantry. He soon finds out that none other than Dizzy, the girl who longed for Rico had also joined up to Infantry.

Once at Mobile Infantry training, Rico meets his new, arrogant friend Ace. Not longer after arrival, Rico works his way up to become squad leader. It is also around this time of the film you find out that his girlfriend, Carmen, is working with Rico’s sports rival from school, Zander, as her flight instructor. Right as Rico is starting to celebrate his promotion, he receives an inevitable video note from Carmen breaking up with him, stating she wants to go career in the fleet. Basically, not seeing each other again. Or will they? If this were real life he would be better off, Diz is way cooler anyway. Let me get back on track. 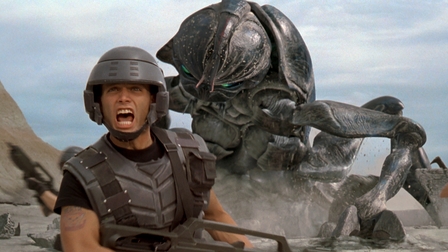 To make matters worse, much worse, during a live-fire exercise a member of Rico’s squad is killed. Rico is whipped publicly for making a bonehead call during the training, and afterwards he resigns from Mobile Infantry. During a phone call home letting his otherwise unsupportive parents know he’s on his way back, the phone call breaks up. The video screen goes black, and they disappear from his view. As Rico takes a walk down washout lane, he comes back only to find out the Arachnids from Klendathu had launched an asteroid and completely wiped Buenos Aires off the map, annihilating his entire family and millions more. He rejoins the military instantly for a full-scale attack on Klendathu and the Arachnids.
Before launching their initial attack, Rico, Dizzy and Ace get tattooed to commemorate the occasion. The ever famous “Death From Above” tattoo mentioned in my beer-pairing portion.

The first attack on the Arachnids by the human fleet is an absolute failure with numerous casualties. Many soldiers don’t even make it to the planets before being killed. Rico himself gets caught by one of the Arachnids and is considered Killed In Action. But, not so fast…He makes it off the planet and in fact survived the attack! Rico, Dizzy and Ace join the Roughnecks, which is lead by their old high school teacher, Lieutenant Jean Rasczak. The Roughneck crew makes a run to Planet “P” to rescue people held up at the outpost, but turns out it is overrun by Bugs. Dizzy is wounded significantly just before Zander and Carmen are able to reach the outpost and fly them out. Dizzy succumbs to her wounds in Rico’s arms, just as she probably would have wanted it. Just, maybe not so soon.

Reunited with Carl at Diz’s funeral, Rico is told about a so-called, “Brain Bug” that is said to be leading the Arachnid attacks. Now, called Rico’s Roughnecks, they go after the Brain Bug to capture it and end the fighting once and for all. An escape pod commanded by Zander and Carmen crash-lands and they are both held hostage by the Brain Bug. While held, this large, rather disgusting Bug sucks Zander’s brain right out of his skull (maybe the most disgusting part of the film). A scene that Starship Troopers and Saved By The Bell fans can both relish in seeing as how this dude was also Zack Morris’ nemesis.
Rico makes his way into the tunnel with a nuke in hand so they can escape. But, will the Bug let them go? Or will it destroy them, and all the other humans as well? You will never know unless you watch for yourself, and drink my perfectly paired beer. 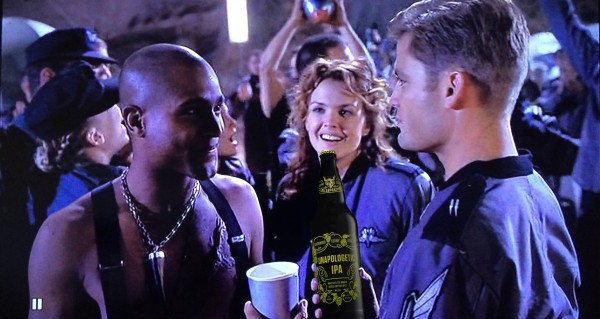