After some time off, your team of bloggers are back and this time we attempt to answer the question – Who goes there!? – When we review and pair a perfect craft beer with the classic horror sci-fi film The Thing. Don’t miss all of our thoughts on the movie that helped revive a fantastic genre.

I am excited to be a part of this collaboration series between myself, and some of my favorite blog writers Dr. Gonzalo Quintero of Craft Beer Tasters LLC, and Eugene Abano of Reviews Galore and new team member Matt Smith of Who Goes There Podcast. Please click their respective links to read their write up, as well as read their craft beer and soda pairing for the film.

In pairing a local craft beer with horror sci-fi film The Thing, I wanted to touch on a couple different elements and in doing so, found just what the doctor ordered. In the film, our team is not only battling an alien creature that wants to take over the bodies of all living things on Earth, they also battle the elements in a snowy, dark, frozen wasteland. What is a beer that can comfort any living thing in a situation such as this? One that can help you forget the troubles of the day, while comforting and warming the body in a place that might reach, say, 40 below zero?

When looking for something that can not only comfort, but also warm the body and soul I decided to reach for none other than Wreck Alley Imperial Stout from Karl Strauss Brewing Company.

Named after a “dark and mysterious seascape of forgotten ships”, Wreck Alley is categorized by Karl Strauss as a stout as deep and dark as its namesake. From the dark, mysterious seascape all the way to the frozen and forgotten land of the Arctic, Wreck Alley from Karl Strauss has ability to soothe the spirits of adventurers and heroes world wide.

Categorized as Russian Imperial Stout, Wreck Alley clocks in at 9.5%ABV and is as complex as the film’s story itself. Brewed with darkly kilned malts, cocao nibs and Ethiopian Coffee beans, Wreck Alley delivers deep roasted flavors ranging from espresso to dark chocolate and flavors come to life as it warms between each sip. Smooth and rich, this is the right beer to sit and sip after a long day of searching Norwegian camps in the snow, fighting alien life forms, or someone just looking to take the edge off during the Fall and Winter months. Bottoms up, spirits down. 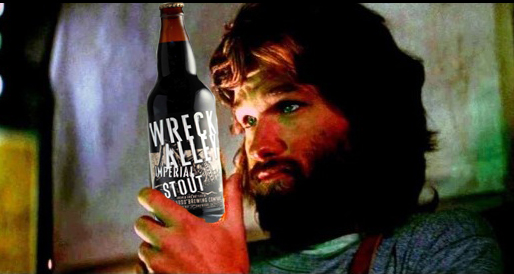 The Thing is the second movie we have added to our line of reviews that joins John Carpenter and Kurt Russell as director and star. The Thing is based on the novella, Who Goes There?, By John W. Campbell. Taking this story and letting Carpenter add his touch of creep and gore, how could you lose right? 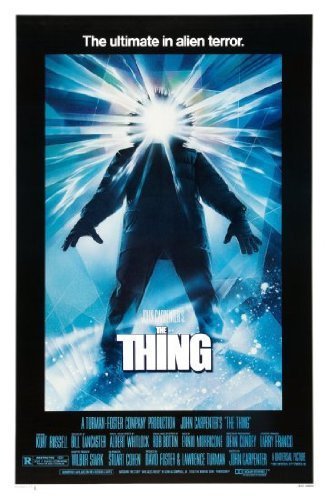 The Thing isn’t your average horror film, with a straightforward killer targeting a select group or individual. We are presented with an alien type of being that can and will take over anything possible. John Carpenter adds elements of suspense as well as some science fiction touches to this film. Due to the nature of the “thing” they are attempting to not only defeat but also outlive, Carpenter creates a level of paranoia amongst the campers, which for some could be the real terror. The fear of the unknown plays big in this film for me. Throw in the added bonus of aliens invading earth and your body? You have a real winner for most horror and sci-fi fans.

Someone unfamiliar with the story of The Thing might be confused by its opening sequence. Just under 10 minutes of a helicopter flying through a frozen wasteland, with a man hanging out the open door trying to murder a dog with a rifle. The helicopter eventually lands in an American camp where the attempted dog killer is shot dead. This leads to our hero, MacReady played by the forever-amazing Kurt Russell to investigate who these people are and exactly what they are up to.

Upon landing and investigating this Norwegian camp MacReady and Copper, a Doctor happen across a grisly scene. A twisted and burned body of a figure with two faces, neither of which offer any comfort and whatever it was in its living form must not have been too inviting of a creature. 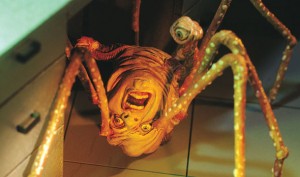 Lets go back a second and revisit the dog situation mentioned earlier. When Clark, the resident dog handler puts the shaken up dog into a kennel with other dogs, answers start to surface. The dog starts to mutate into some sort of alien “thing” and attacks the other dogs. The campers come running and light the thing up with a flamethrower. After an autopsy of this mutated dog “thing”, it is determined that whatever this creature might be, it imitates other life forms after entering their bodies.

The team soon turns to every man for himself as they continue to watch their comrades be burned to death after their bodies are taken over by these alien creatures. One by one we see man and animal destroyed by this unknown THING. Can MacReady save the team and possibly the entire world? Open up a perfect craft beer and watch for yourself.

The Good: I did enjoy the writing and story development for this movie. The level of paranoia in each character, as well as the feeling of being completely alone in a snowy, frozen world really is truly terrifying and the audience feels that loneliness, tension and fear throughout. Of course, Kurt Russell rules in this as usual. Plus the visuals are creepy and overall terrifying.

The Bad: Maybe it was because I watched this while fighting a fever and flu, but I found myself at times wanting more dialogue and less of the “Let’s stare at each other scared while intense music plays”. This did add to the overall mood of anxiety and terror, but I would have wanted more. Sorry, sue me.

Overall: The tension, panic and overall fear makes The Thing a fun adventure to relive, especially this time of year. The feeling of panic and the horrifying visuals make for a true horror adventure. This film helped breathe new life into the Sci-Fi Horror genre of the time and for that we can all be thankful.