The holidays are finally upon us, and the first stop is the holiday most people probably look forward to more than any other – Halloween. Well, in continuing our series of pairing craft beers with classic films, what better to choose than classic horror film Halloween and a perfect craft beer to accompany it? I am sure you agree.

In choosing a beer with an iconic, game changing film such as Halloween, I felt that the pairing could go multiple ways. Do you pair it with the holiday? Do you pair it with an element from the film? What is a murder beer exactly, and if one is being made today who in San Diego is currently brewing it?

After some thought, I fell upon what I feel is the best option in pairing a perfect local craft beer with a slasher, terrifying film such as this classic and I chose Magna Cucurbita from Mike Hess Brewing Company. 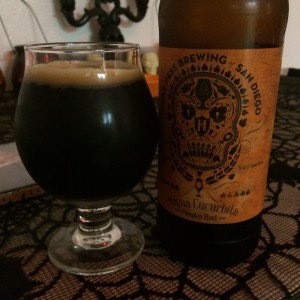 Now, I know this time of year a lot of pumpkin beers get released and people have mixed emotions on them as a whole. I have never really bought in to the entire style, but this year I decided to dive in and give a few a try, and Magna Cucurbita sets itself apart in a big way.

Categorized by Mike Hess Brewing as a “Scary Good Beer”, Magna Cucurbita, or “The Great Pumpkin” is a pumpkin stout screaming in at a respectable 7.25%ABV and pours dark, maybe even as dark as a Haddonfield Halloween evening. Brewed with roasted pumpkin, spices and dark malts this beer is toasty and delicious in all the right ways. The pumpkin and spice comes through subtle at first and becomes more apparent as it warms, but is a very welcomed flavor in the roasted and slightly oaky stout. No alcohol bite, but will keep you company on a cool fall evening that’s for sure.

Not just your average pumpkin beer, this one stands in a league of its own with the tasty and drinkable stout backbone and the earthy spice and pumpkin tones mingling throughout.

Warming and comforting, this beer could stand well paired with a sweet dessert after a fall family meal, or keep you company on a terrifying Halloween evening when a masked madman is out to get you and has just murdered a couple of your close buddies. Crack open a bottle amongst friends before you crack some Haddonfield skull. 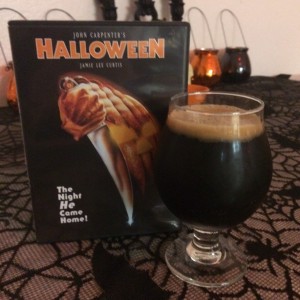 Apparently, it has become a John Carpenter-fest here with our blog team’s Beer and a Movie reviews. At least this time, in making it a solid hat trick of Carpenter films, the latest is not only warranted but we mix it up by, what!? Not including Kurt Russell? How could we?

Its Halloween time everyone, with that being said, it is only fitting that we throw the 1978 horror film Halloween in the spotlight for this week’s feature. Don’t get me wrong, it does fit the holiday we all seem to love and will celebrate in one-way or another. But, since its release, it has also set a standard in not only “slasher” films, but psychological terror as well. With many of its elements being imitated in films that came later, it’s considered among the best of all time.

Halloween follows the quiet, masked maniac Michael Myers, who we see at age six stab his older sister to death in his oh so innocent looking clown Halloween costume. In fact, the scene of him in the costume standing outside the now iconic house holding the bloody knife is still to this day jarring enough to make even the most carefree human shudder in fear.

Fifteen years later, Myers is back in Haddonfield after escaping the Sanitarium where he had been committed since the murder. After acquiring a blue jumpsuit and white mask, he proceeds to stalk local high school student Laurie Strode. We see him cruising around, creeping in the bushes and whatnot as she heads home. Meanwhile, Myers’ psychiatrist Dr. Loomis who, upon Michael’s escape fully anticipated his return home, heads to Haddonfield to start searching for him with the local sheriff.

That evening, Halloween evening to be exact, Myers unleashes his own brand of terror on Laurie and some of her seemingly promiscuous buddies. It is shown not long after that Laurie happens to be the one he is after. But why you ask? Well I think if you haven’t seen this classic and game changing horror flick, first of all throw all your candy out the window because you don’t deserve any tricks or treats. Secondly, crack open my choice as a perfect craft beer pairing and get to watching. And if it’s your first trip around Haddonfield, you might want to leave the lights on.

The Good: Halloween is, as I mentioned before, a game-changing horror film that really has inspired and shaped much of what the common “slasher” film has become since its release. Regardless of its generally tame gore factor, this film still to this day carries a trunk load of psychological and horrifying elements. A masked man who carries out his kills swiftly and quietly with what appears to be no reason other than he just decides he wants to. The stares through the mask, the visuals of Myers peering in windows and through bushes makes any fear of the “boogeyman” seem as though they could happen to you. Oh and I can’t forget to mention the theme song that sends chills down the spine of anyone who has witnessed the madness. I mean, I even used it in my Halloween Podcast intro.

The Bad: It would be cool if there was a bit more of a gore factor to it, but as stated before this doesn’t take away from the movie. In a way it makes it even creepier. I really don’t have much bad to say about it.

Overall: What can I say that I already haven’t said here? It’s the quintessential Halloween film and has stood the test of time, terrifying viewers over multiple generations and will continue to do so.