Joy to the world! Movie and a Beer is back! This time to ring in the Christmas season, we bring to you the gift of a perfect craft beer pairing and the modern day classic National Lampoon’s Christmas Vacation! Huddle around the fire, turn on the lights and prepare to be filled with holiday cheer! Or something.

Christmas time is finally here. Chestnuts roasting, carolers a-caroling, presents and of course winter craft beers. Who doesn’t love a good seasonal this time of year? With so many to choose from, how do you even begin to pair the right beer with such a wonderful holiday movie such as National Lampoon’s Christmas Vacation?

A true modern Christmas classic such as this can only be paired with something with a similar stature, albeit in the craft beer world. I felt as though when it comes to San Diego winter craft classics, one can only reach for a beer that not only pairs perfectly with one of my favorite holiday movies, but can also really lend a hand to all your Christmas adventures. That beer my friends is Santa’s Little Helper from Port Brewing Company in San Marcos. 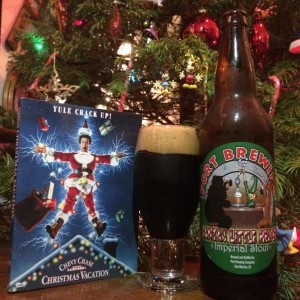 Clark Griswold, described as “the last true family man”, just wanted to show his family a good-old fashioned family Christmas. But with the unfortunate circumstances that stand in his way of delivering true Yuletide cheer, I think if anyone could use a true “helper” it would be ol’ Clark.

Santa’s Little Helper is a beautifully brewed Imperial Stout from Port Brewing Company. It checks in at a respectable 10% ABV and definitely packs a cheer-filled punch. With a luscious coffee nose followed by dark chocolate bitterness, accompanied by the warming effect from the higher alcohol, this stout is definitely the top star on San Diego’s Christmas tree.

Port Brewing describes Santa’s Little Helper as “…one seriously naughty but nice beer.” Let’s be real, Santa can’t expect us to be nice ALL the time, right? This is a beer that is perfect to help you through good times, and bad, surrounding the holidays each and every year. Plus, it comes in a 22oz bottle so it’s perfect company while hiding from your family in an attic. Or, I guess you could share it if you really want to…I know I don’t! 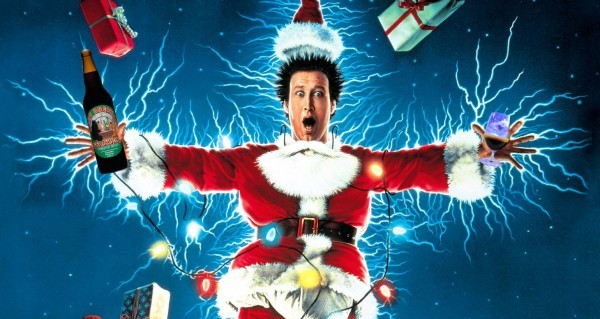 It is only natural to choose a movie like National Lampoon’s Christmas Vacation for our first Christmas themed beer and a movie feature. For one, it truly is a modern Christmas classic and can stand up next to any other holiday movies around. When it comes to comedies, come on! There are great Christmas comedies and then there is Christmas Vacation, above all, period.

As a life long die-hard fan of the Vacation film series (minus that European bowel movement on tape) of course I won’t have anything bad to say about it. I watch it every year multiple times and I even have corresponding Griswold ornaments, plural, on my tree.

Christmas Vacation checks in on the Griswold family at home in Chicago as they prepare for what Clark (Chevy Chase) hopes will be the best holiday yet. But from the very first family adventure, picking up the almighty Griswold family Christmas tree, things go south. But regardless of rednecks running them off the road, and having to pull a massive tree out of the frozen ground due to no hand tools, the family’s spirits remain high.

This all changes as their extended family arrives to spend the holiday season at the Griswold home. Arguments flare, children are pissy, and Clark’s 1,000 plus light display doesn’t seem to want to light up. On top of everything else, Cousin Eddie shows up in a busted out RV. Can things get any more complicated? It can if you are depending on your Christmas bonus to come in to cover a down payment you put on a pool for your backyard. 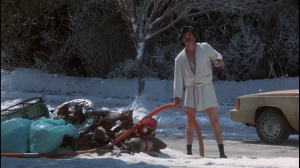 Will Christmas go as planned? Well, more than likely no it won’t. But somehow can Clark salvage his family’s Christmas even though his holiday is starting to resemble a real life game of Nintendo’s Paperboy? Will they ever see his Christmas bonus? Will the lights on the house EVER light up? What in the world is in that moving box under the tree? Pop open a Port Brewing Santa’s Little Helper Imperial Stout and find out for yourself.

The Good – Almost everything about it. Chevy Chase is hands down hilarious in this as the warm and loving yet dopey dad Clark Griswold. He is, in my opinion, an iconic character that will live on for generations to come. Paired perfectly with the mother that we all love – Beverly D’Angelo. Their chemistry is gold, the comedy is side-splitting and the family love is heart warming. Also, let’s not forget a young Johnny Galecki as Rusty. That’s right, before he was nerding it up on TV, he was making you laugh as a Griswold! If you haven’t seen this movie I feel bad for you son, I got 99 problems but a laugh ain’t one.

Overall – This is about as good as it gets, folks.