In an attempt to remain on the “nice list”, we are BACK with yet another Christmas Movie and a Craft Beer pairing! Don’t miss out as we pair the classic Christmas comedy Scrooged with a perfect San Diego craft beer. Bundle up and prepare for pure enjoyment friends! Happy Holidays!

As I write this we are all staring down the barrel of the metaphorical Christmas gun. The chamber is locked, loaded and ready to fire off a round of cheer and we couldn’t be more excited about this. To prepare for what is sure to be an exciting holiday week, we are delivering you the gift of preparation. How so, you ask? By pairing yet another great San Diego craft beer with a positively classic Christmas film.

This week we have chosen on the Christmas comedy Scrooged starring Bill Murray, a wacky and wild retelling of the A Christmas Carol by Charles Dickens. In pairing a local craft beer with this movie I considered many things, most of which no longer matter because well, I could only choose one. The one I chose is Winter Yulesmith by our friends over at Alesmith Brewing Company. 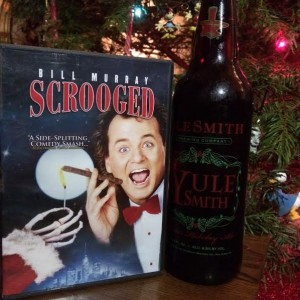 I know, I chose an Alesmith beer once before in another perfect pairing. I get it, but hear me out. When choosing these beers, much like the movies themselves, we want them to be easily accessible to you so you can enjoy them as well. Which is why I try to choose something in most bottle shops that you can go pick up and enjoy with family, friends or possibly keep for yourself…you old Scrooge, you.

Scrooged itself is a classic Christmas comedy, but it is also as mentioned before a retelling of an even larger, more widely loved story. So I wanted to pair this with a classic and widely loved San Diego craft beer. Enter Winter Yulesmith.

Winter Yulesmith is an Imperial Red Ale brewed with the holidays in mind. A deep malt backbone and caramel sweetness accompanied by an intense hop aroma and slight bitterness delivering a fantastic beer as complex as, well, spending Christmas Eve with a bunch of ghosts. Cruising in at a nice 8.5% ABV it’s just enough to keep you warm but not strong enough to have any “boozy” elements or tip you over the edge.

A great winter beer that can help keep you alert and comfortable while time traveling with spirits, but not so tough that you start missing beats on your journey to a perfect Christmas. Happy Holidays everyone! 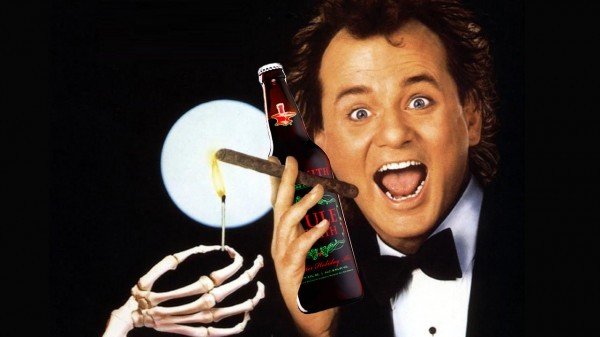 For what appears to be the final Craft Beer & a Movie feature of 2014 it should not be shocking that we collectively chose the movie Scrooged starring Bill Murray. Yes, for obvious reasons such as it being Christmas and this happens to be a Christmas movie. But also if you haven’t noticed, the three of are big Murray fans what with covering Ghostbusters 1 and 2 in the early stages of our pairings. Regardless, here we are.

Scrooged is a wild and comedic take on the classic Dickens story A Christmas Carol. Filling the role of the Ebenezer Scrooge instead is Frank Cross, a cold hearted, scumbag type who is as cruel as the day is long. Cross (Murray) is a top-level television executive who has thrown away everything, including love and family, to make it in his desired industry. On his way to the top he alienated himself from his family, overworked and under appreciated his employees (even by firing one on Christmas eve for just stating his opinion). He has also thrown away what could have been true love with his dream girl Claire.

While following the familiar formula of the original story by Dickens, Scrooged takes us on a much more entertaining adventure while still finding ways to touch our hearts along the way. It should go without saying that if you throw Murray into the mix, pretty obviously the comedic elements of that story will be elevated. Murray uses his ability to deliver deadpan comedy with absolute perfection as usual, while using his natural energy to light up a scene and warm your heart right when you need it most.

I mean come on; we all know how this story is going to develop and how it will end. It’s not about the element of surprise here folks. It’s about the specific journey and Scrooged takes you right where you want to go. From the sad past which Cross was a product, to the maddening present where Castle walks over and dumps on anyone around him to the future which shows an unattended funeral from a long life of deceit and negativity. By channeling the magic of Christmas, Castle just might be able to fix it all. But is it too late?

Will Frank find the error of his ways and turn his life around? Or will he continue along a lonely, dark and deserted path by himself until the day he dies? Better grab one of my perfectly paired beers, sit back and watch it all unfold. Who are you kidding though; you know where this is going.

The Good: Bill Murray can do no wrong. He is an American icon and a comedic powerhouse. Put him in a scene and the screen seems just a bit brighter and definitely more entertaining. The movie has the ability to make you laugh, warm your heart and consider your own destiny through the magic of Christmas and love.

The Bad: From the outside, you might expect gut busting laughter from watching this film, but it just isn’t quite there. Yeah it is funny, but it isn’t what you might hope or expect from such a film.

Overall: If it isn’t, it should be a staple in your holiday movie collection. It is funny and heart warming in its own little way. The ending sequence is filled with holiday love and excitement, which even as an adult is quite touching. Get your head out of your stocking and give it a whirl.